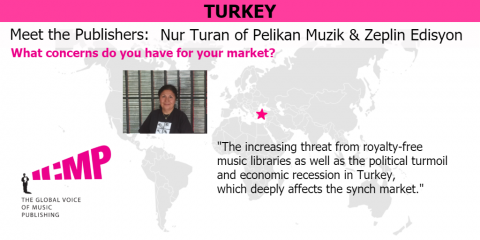 How did you get into music publishing?

After gaining corporate experience in magazine publishing and marketing, I started working at local collecting society MESAM, where I was the manager of the membership and documentation department. This post gave me an understanding of not only the concerns of local writers, but the concerns of foreign repertoire via the agreements of affiliated sister societies. I'm one of the founding partners of Pelikan Muzik and Zeplin Edisyon.

What concerns do you have in your market?

The increasing threat from royalty-free music libraries as well as the political turmoil and economic recession in Turkey, which deeply affects the synch market.

I'm involved more on the creative side, including CRM. Therefore, a typical day sees me mostly listening to and pitching music. As Turkey is only beginning to be copyright aware, our mission as a local publisher also involves advising users on how to improve that awareness.

How is your relationship with your local collecting society?

There are two collecting societies in Turkey - MESAM and MSG. Publishers are non-voting members and a considerable amount of repertoire (especially foreign music) can't be represented on the boards of both societies. In order to fill the gap, the Turkish MPA (MEDDER) holds regular working group meetings with both societies.

Is there any legislation of concern coming up in your market?

As part of EU membership negotiations and depending on the needs of the digital era, the negotiations for the new copyright law have been taking place since 2010. The draft law has been announced by the DG Copyright, Ministry of Culture and Tourism with quite a number of controversial articles. MEDDER has submitted its views and proposals to the DG Copyright earlier this summer, along with 700+ views from collection societies, music users and universities. We are waiting to see the final version of the law and do hope that our core proposals are implemented. I should underline that ICMP has been very supportive to MEDDER during the whole process.

How do you see your market evolving over the next ten years?

I see it improving but not fast enough to catch up with the huge global changes. Local collection societies in particular should adapt to these changes by improving their infrastructures in order to offer a better service to their members. The export of Turkish soap operas globally has created a new alternative income source to music publishers and we expect this to continue.